Stay informed with the latest news

Informative, compelling, gain the advantage with news that matters most.

Google kicked off its annual developers conference, Google I/O, on Wednesday, May 14, with a keynote lasting nearly four hours.

One of the biggest announcements to come out the event was a complete overhaul of Google Maps. This was expected thanks to a leak last week, and then another one earlier this week, but it is still a huge deal, as Google Maps is one of the company's most popular products. It also plays a major role in how people find businesses using Google from the desktop, tablets, and from mobile devices. Google actually announced revamps for each of these devices as well.

The new Google Maps for Android smartphones and iPhones is coming this summer, and will include a new Zagat experience, with Zagat badges appearing in the interface, as well as Google Offers integration. If you find Starbucks, for example, you can see an offer from them, and save it for later or use it. There is also a new five point rating scale across Google Maps for mobile and desktop. With the new tablet interface, Google will point users to businesses and destinations by categories with a new discovery feature called "Explore". With the new desktop Maps experience, Google highlights things it thinks matter to users. "And the more you interact with the map, the better it gets," says Google. "When you set your Home and Work locations, star favorite places, write reviews and share with friends, Google Maps will build even more useful maps with recommendations for places you might enjoy." "In addition to a customized map, we've also made it easier to uncover the best local gems," the company says. "Search results are labeled directly on the map with brief place descriptions and icons that highlight business categories and other useful information – like restaurants that are recommended by your Google+ friends. Info cards provide helpful information such as business hours, and ratings and reviews so you can quickly decide where to eat, drink and play." 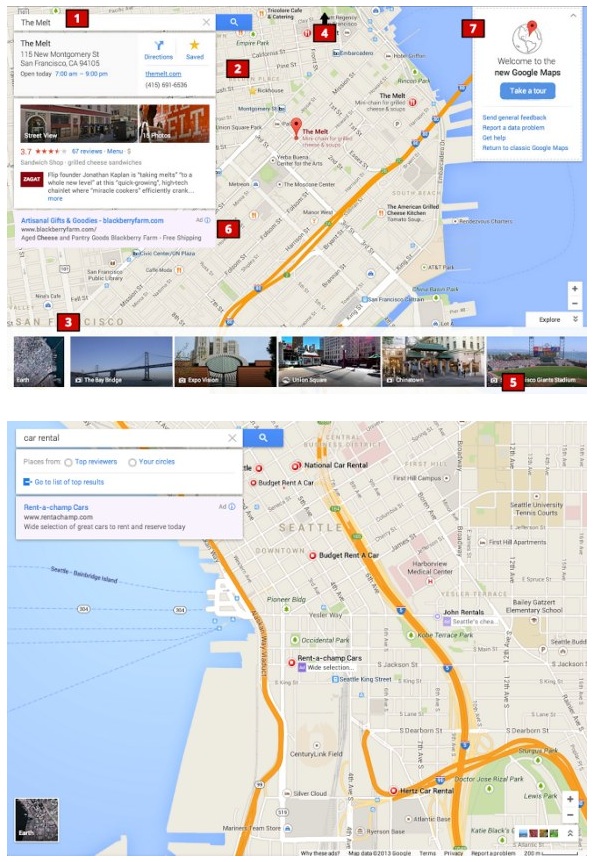 Get news, tips and special promotional offers. Sign up today.

Be the first to hear about online marketing ideas, branding, security tips and current news. No Spam. It's a promise.

During the COVID-19 situation, information is changing frequently. For existing clients, please be sure to read our email updates.